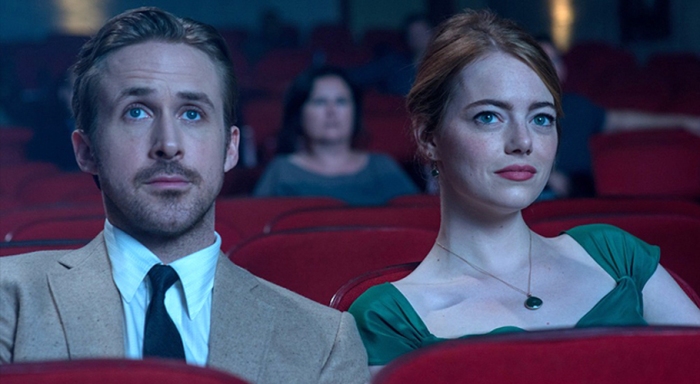 They say there are no new stories to tell, and nothing new under the sun—that phrase itself is a cliché, see. Yet we still need these tales, for ineffable and primal reasons. Why? Well, it’s ineffable—so sometimes it’s beyond words.

“La La Land” is one of the most familiar stories in the modern canon: girl has a dream of stardom and pursues it in spite of demoralizing setbacks. On top of that, it’s a love story between a girl and a boy—and the boy also has the same dream, essentially. This sandwich of familiarity is enough to send any quasi-cynic running for shade—and I don’t mean for cover. But oddly, many of us are still on board with this setup; so much so, that this film has become the breakout hit of the year: Oscar bait and pop cultural force. And for good reason: for many, it’s simply our story.

The film opens with an inventive musical nod to one of the hallmarks of the city of stars: L.A. traffic. In a gridlock on a steep highway overpass, passengers do the most natural thing in a musical: break into song and dance—jumping on top of their vehicles, courting each other out of their cars, and dancing on the concrete lane with unmitigated reverie, proclaiming in the song’s title how it’s “Another Day of Sun”. For a person who’s lived in Los Angeles longer than I care to divulge, this scene blew straight passed my jaded antennae and bowled me over with its unabashed whimsy. Instead of scoffing at the absurdity of it all, I wanted to join in.

At the song’s end, we meet Mia, played by pixie-ish but quirky Emma Stone. Mia is an aspiring thespian who heeded her childhood calling to tinsel town to realize her dreams of becoming a star—but mostly to tell stories through her craft, like every bleeding-heart artist on Earth. Although Mia is certainly likable, the film is less about character than plot and ideals. Stone is competent as always, but you guessed it: does not add a new wrinkle to this careworn archetype. She does add another notch to her increasingly impressive repertoire, proving that Hollywood may not be so shallow after all: in one scene, after a humiliating audition, Mia zips through a hall of Stone-lookalikes that are also vying for the part. In the elevator, flanked by two of these clones, she is clearly the least statuesque and nubile.

This doesn’t stop her from catching the eye of another aspiring artist, Sebastian—a somewhat aging (by Hollywood standards—read: thirties) jazz pianist played by the still smoldering and chiseled Ryan Gosling. He has the slightly more original dream of the two by default: to simply open up a jazz club, which is a feat because it’s a jazz club and this is the twenty-first century.

In a subdued, if not entirely original setup, Mia is drawn into a nondescript nightclub by the chords of a pensive tune that she hears Sebastian playing inside. This melody becomes a smartly recurring musical motif throughout the film. It’s there that she spies Sebastian, but thankfully it’s not love at first sight for either party. They meet again shortly after through serendipity (he’s a keyboardist at a Hollywood party that she attends), and the inevitable develops between these two passionate artists—cue: excoriating debates on the merits of their crafts and the plausibility of their dreams to secure them, and—romantic love. They inspire each other and cheer each other on, unsurprisingly.

These scenes are padded by more musical numbers—less grandiose in overall production, but still charming and catchy—particularly the lovely, haunting theme of the film, “City of Stars”. These numbers also continue to pay winning tribute to more L.A. trademarks and locales like the Griffith Observatory, beach piers and the Watts Towers. The film does lose its musical momentum in the second half of its story, which will not go unnoticed by musical connoisseurs. For novices like me, it’s the best of both worlds: I enjoyed the songs far more than I’d expected from a traditional film musical, but I was just as happy to be saddled with plain plot and character in the interim, however uneven.

I won’t disclose too much of the remaining plot, because it’s no trouble guessing for a proverbial tale as this anyway: the story reaches its emotional apex when Mia can’t bear another humiliating failure, and hits the sore spot many viewers who bought into this story for personal reasons, fear most—pondering that she may not be destined for greatness after all.

Nonetheless, the ensuing conclusion is probably what you’d expect for both aspiring artists in a film like this. And with that, this is the reason why these familiar stories still work: we need to be reminded that things are possible. It’s not cliché; it’s human—which one came first? (Well, frankly the human—but one thing informs the other). Notably, the movie does handle the love story between Mia and Sebastian with less hackneyed results, and I will leave that utterly out of this review for the viewer to discover on their own.

“La La Land” is nothing new, but it’s a tale we’ll never grow tired of because (many of us) will always care about the things it cares about.